Shinobu Namae is a bit of a food critic’s darling in Tokyo’s competitive fine dining scene. With two Michelin stars, a ranking of #12 on Asia’s 50 Best Restaurants, and an entire CNN Culinary Journeys episode dedicated to him, the sky seems to be the limit for him and his restaurant, L’Effervescence.

Still, while the restaurant had always been on my own culinary radar, the effort required for a reservation and the hefty price tag had deterred me from visiting.  One fateful night in early June while casually perusing OpenTable, however, I found a rare Saturday table and decided to snag it.  For the most part, it was worth it.

When it comes to Tokyo dining, L’Effervescence stands toe-to-toe with the big hitters like Narisawa and Quintessence.  The food is creative, meticulously plated, and delicious. The service is attentive and rarely misses a beat.  The interior design is plush, if not a tad dark, with white table clothes but a “no jackets required, yet collared shirts preferred” kind of vibe.  Expect Radiohead, Rolling Stones, Beck, and The Doors providing background music.

Of course, this is Tokyo haute cuisine and the price tag is “haute” as well.  Only one menu available at dinner for 20,000 yen plus service and tax.  Lunch is 10,000.  Add a few glasses of wine (pairings and an extensive bottle list also available), and you’re looking at at least 32,000 yen per head.  Prepare accordingly. 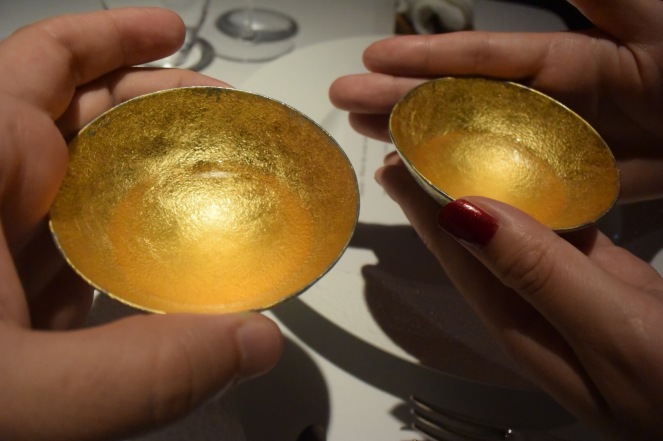 The meal starts with a serving of wine mixed with sake. A good way to start the course that features Japanese ingredients prepared using French technique.

Some olives to accompany our champagne. 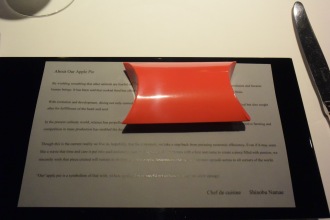 One of the restaurant’s specialities is “Just like the apple pie.” This was the 29th kind they’ve made. 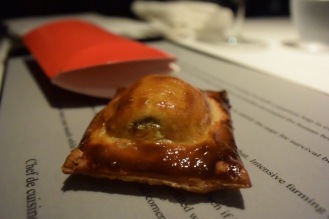 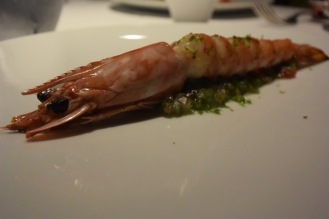 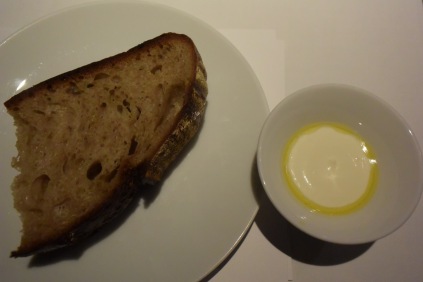 The delicious, soft, warm bread is served with a tofu and sour cream spread with a touch of olive oil.

Another speciality – “A fixed point” – Tokyo turnip cooked for 4 hours, parsley, Basque ham, and brioche with an Italian parsley and spinach sauce. The juciest turnip ever.

Migration- Chilled sweetcorn soup and cultured milk, mole negro. Apparently, the chef was influenced by his trip to Mexico to eat at the Noma popup in Tulum. Simple, but very artistic.

Consomme from the ayu sweetfish to be served next. This is one whole fish worth of reduced and clarified consomme.

“Summer” – Ayu served with its fermented innards, edamame, rice vinegar, taro stem. The head was lightly fried, crispy, and delicious. A beautiful dish and one of my favorites from this course. 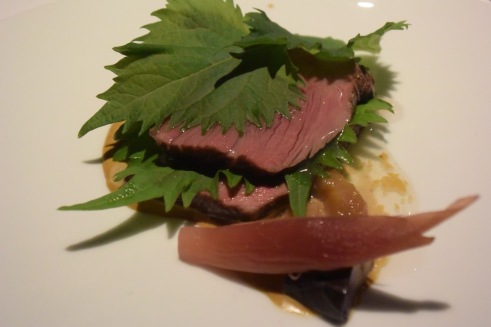 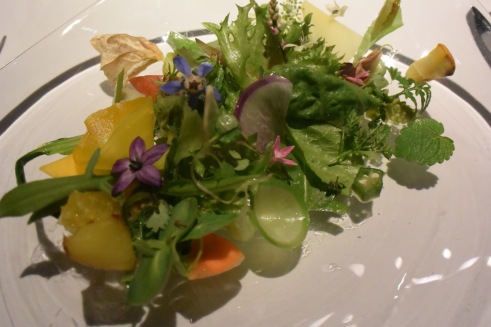 Post-dinner salad is made up of 50 different products from artisan farmers. They give you an entire list with the salad, but I won’t type it here. Very reminiscent of Den’s salad. I wonder who copied who? 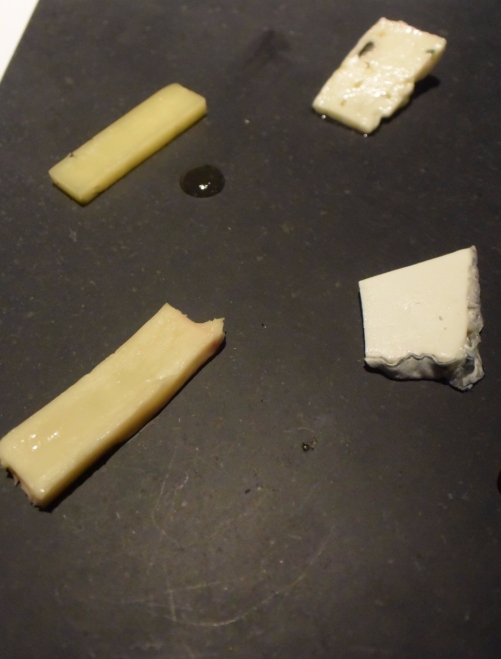 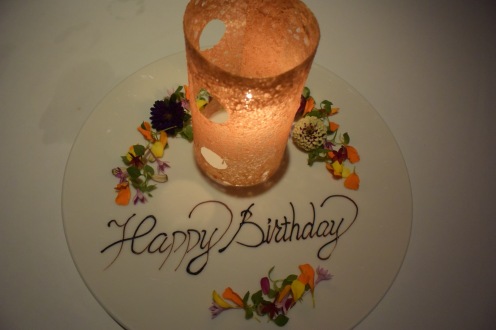 A kind of late birthday celebration came with this very pretty plate. The edible candle is orange flavored. 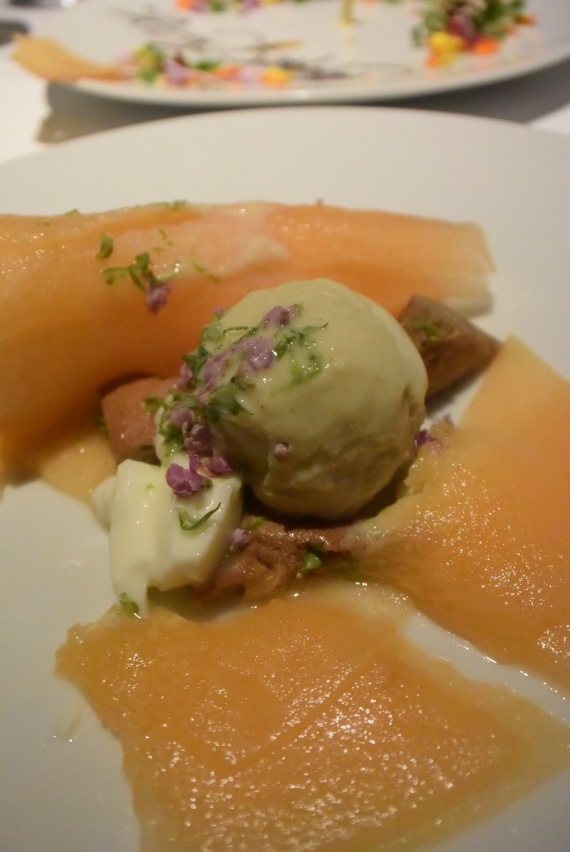 “Little nap in the meadow” – Peach, mugwort, goat milk. In my opinion, this was the weak point of the night, but Midori loved it. A dessert for the Japanese palette, perhaps.

At this point, they bring a green tea cart to your table and serve green tea in the traditional Japanese tea ceremony style.

Green tea and “World Peace” in the back- a kind of peanut milk with brown sugar. 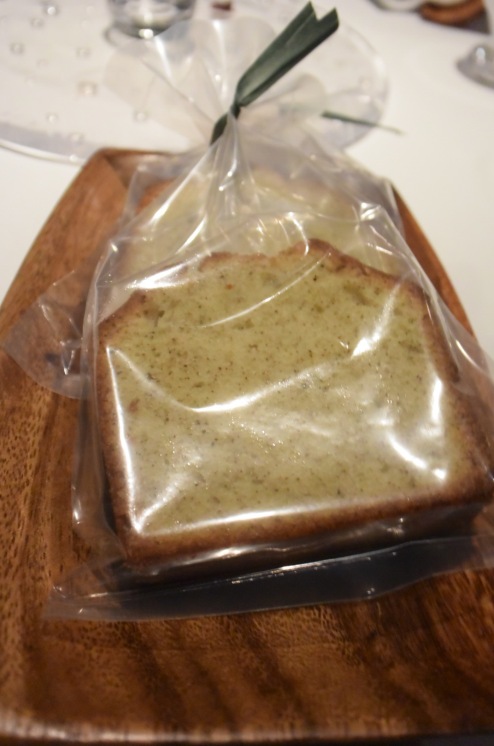 Some delicious pineapple bread to take home as a souvenir.